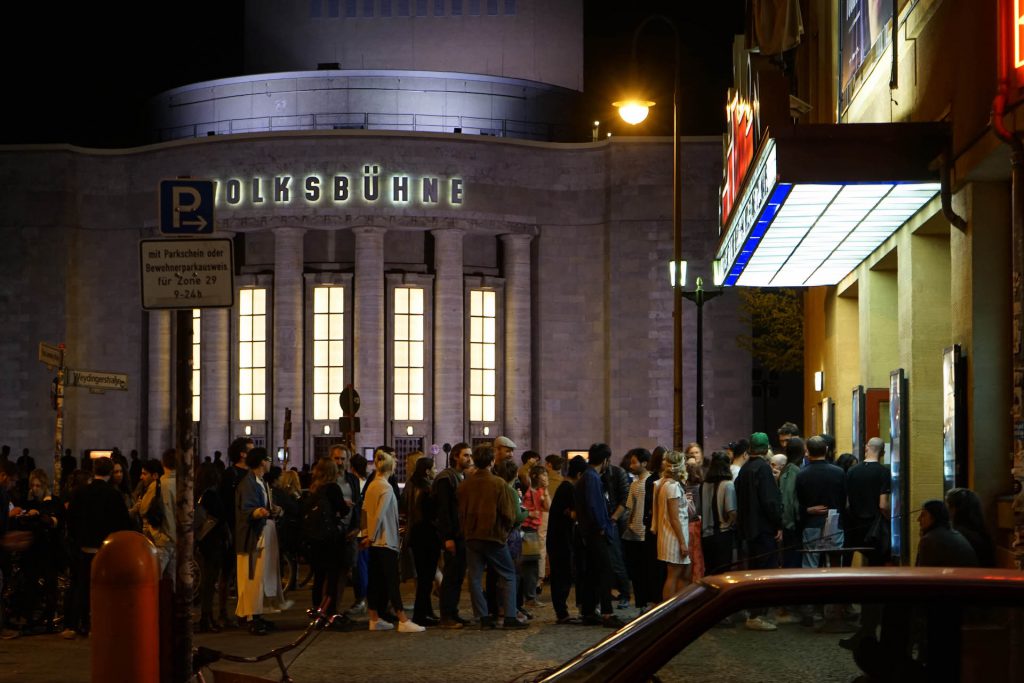 WE CELEBRATE
VIDEO ART
IN BERLIN
About the Festival

Since VIDEOART AT MIDNIGHT was founded in 2008, on 99 nights up to now, artists have seized the opportunity to show their film and video works outside of the usual exhibition context for once: at the cinema, on the big screen, before a big audience that views the entire work together, focused, and from beginning to end. In the ten years of its existence, the series has developed into an internationally renowned platform for artist films and video, highly appreciated not least by the artists living in Berlin. The 100th edition is a cause to celebrate— the anniversary, cinema, art, and of course the artists themselves.

At the center of the anniversary is a two-day artist film and video program at Kino Babylon in Berlin Mitte: 100 Artists—100 Films. The program kicks off on Friday night with the 100th edition of VIDEOART AT MIDNIGHT with Ed Atkins. For the festival program on the following Saturday and Sunday, all of the artists who have been guests over the years are once again invited to show a new piece of work or one that is particularly important to them. Many of them will be attending in person and presenting their work to the audience.

Before this weekend, an international symposium, curated by Marie-France Rafael and entitled Future Continues Present(s)—“Video Art” Through Time, will take place at Hamburger Bahnhof – Museum für Gegenwart – Berlin. For two days, experts and practioners will be discussing issues such as media archaeology, medium specificity, or the exhibition, collection, and conservation of video art, raising questions on the past, present, and of course the future of the genre. Part of the symposium is a Keynote Lecture at the Neuer Berliner Kunstverein (n.b.k.). The night before the symposium opens, Wulf Herzogenrath, whose work as a curator has made important contributions to establishing video art in Germany over the past decades, will provide insights into his career and the history of video art, moderated by Franziska Stöhr, at Akademie der Künste.

A video art festival would not be complete without exhibition of the medium in space. In cooperation with renowned Berlin institutions, four presentations will be taking place as part of the festival, which will put video art and artists’ films into focus in a different manner. The Berlinische Galerie will be showing an expansive video sculpture by Raphaela Vogel in her first solo exhibition in a Berlin institution, the KW Institute for Contemporary Art will be presenting an installation by Christian Friedrich, Galerie Pankow will be engaging with the filmic work of Barbara Metselaar Berthold, an artist primarily known as a photographer, and the Akademie der Künste will for the first time open the archive of Wulf Herzogenrath to the public, which is housed there.

During the entire festival, as part of the Campus event, students of four German art schools have the opportunity to engage with the artists present during backstage conversations and to benefit from their expertise.

For ten years, VIDEOART AT MIDNIGHT has provided video artists with a cinematic platform for a late-night solo screening of their work, posing the central question: What happens to video art when shown on the big screen? On the occasion of VIDEOART AT MIDNIGHT Festival ’18, the Artists’ Film Days celebrate the past decade by bringing all 100 artists together for the first time, each having been invited to contribute one recent piece or a long unseen work. The 13 curated screenings showcase the history of VIDEOART AT MIDNIGHT through the enduring involvement of its artists—all of whom will be present—while also presenting contemporary tendencies in video art, be they thematic, stylistic, methodological, or aesthetic.

In the era of continuously developing digital tools, video art has long become different from video technology. Moving images in the context of art thus increasingly exist in an in-between of aesthetic regimes: between art and film, film and video, cinema and exhibition setting, as well as between (new) structures of seeing and showing, producing and consuming, or the circulation of images. In order to understand media, we have to analyze their technological basis, its effects, and social use. This means connecting the history of media art, its development, and the paradigm shift it initiates. but such a connection presupposes that this basis, these effects, and this use of media—also in view of the urgency of collecting and preserving—are put in relation to one another from ever new discursive perspectives, such as a new ontology of media.

Together with the Hamburger Bahnhof – Museum für Gegenwart and the Neue Berliner Kunstverein (n.b.k.), and as part of the VIDEOART AT MIDNIGHT Festival, the international symposium “Future Continuous Present(s)” tracks the history, present, and future of all that is commonly called “video art” in the art context—and that Videoart at Midnight has presented for ten years in the specific setting of the cinema. The construction of linear narratives tends to bear the risk of neglecting important strands and facts or pushing them to the side. A linear-progressive temporality, in which the past and present shape the future, is just one possibility among many. The symposium seeks to focus on a modality in which the future shapes the present. This is already alluded to in the symposium’s title, “Future Continuous Present(s)”. The title goes back to the video installation Present Continuous Past(s) (1974) by Dan Graham. Through a (self-reflecting) “time-delay video feedback,” Graham manages to convey by artistic means the aesthetic experience of the condensed relationship between different temporal levels, or rather, how the historicity of aesthetic experience can be reflexively experienced in its continuation: the present anticipates the past.

“Future Continuous Present(s)” in turn seeks to shed light on the thinking of a future continuing in the present. How does the development of digital technologies influence new forms of art production and reception, and which effects does this have on the preservation of media art? This also involves the question how artists reflect and provoke as well as evoke sociocultural implications and transformations. At the international symposium, these questions will be discussed in talks, panels, and artist conversations. The center and point of reference remains “video art” through time, for artistic engagement with and through media is constitutive for the continuing (re-)formation of a discursive field, in which the future anticipates the present.

Video art is a hybrid genre with many faces. In the art context, the moving image has always formed alliances with sculpture and installations—and the reception of video art has always been strongly dependent on the different forms of presentation. This is why Videoart at Midnight has partnered with four Berlin-based institutions in order to examine the different sides of the genre outside of the cinema. What goes for the monthly events of Videoart at Midnight also goes for the exhibitions: full focus—on individual artists, protagonists, and works. Thus, the Berlinische Galerie is showing a large, expansive video sculpture by Raphaela Vogel in her first institutional solo exhibition in Berlin; the KW Institute for Contemporary Art is presenting an installation by Christian Friedrich; Galerie Pankow engages with the filmic work of photographer and filmmaker Barbara Metselaar Berthold, who grew up in the GDR and relocated to West Berlin in the 1980s; and finally, the Akademie der Künste is providing an insight into the unique archive of Wulf Herzogenrath, who as an art historian and curator has had a decisive influence on establishing video art in Germany.

Olaf Stüber
Curator of the exhibitions and festival director